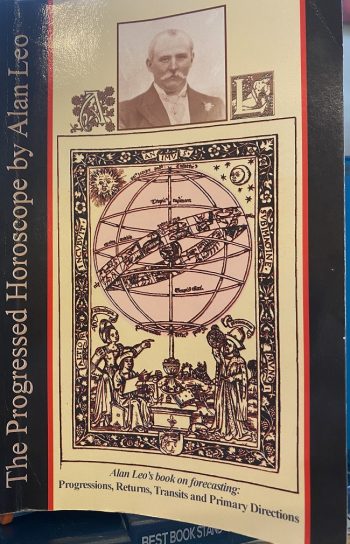 The interpretations for the progressed ascendant in Aquarius on this page are from The Progressed Horoscope by Alan Leo (1906).

This will bring a new cycle into the native’s life; it marks the beginning of a period when he will take more refined and humane views generally, and will endeavour to look at all things from a higher mental standpoint.

He will have fresh experiences in connection with friends and acquaintances, and some new friendships will be formed that will play a very important part in his life history. He will now join groups of persons or associations of some kind, and will form attachments that will be idealistic in nature or of a mental character rather than in any way emotional or sensual.

The directions operating will affect him mentally, and he will be very much inclined towards all things that are in the nature of reform, will begin to have humanitarian views, and will be drawn to “higher thought” subjects.

He will now develop a faculty for reading character and judging human nature, and will be deeply interested in all occult studies, possessing the ability and having the opportunity to investigate those things which are connected with aspirations and hopes that are mental or spiritual rather than physical and material.

The above description applies chiefly to the more adaptable and progressed types of humanity. The very ordinary person will be only slightly affected by the mental influence and will respond merely to the tendency towards fixation, becoming pronounced in his views and tenacious of his rights and privileges, inclined to acquire or deal in land and property.

In any case, however, the native will now meet with persons who will become his friends whether for good or ill; and hence he cannot be too careful with regard to the acquaintances whom he cultivates while under this influence.

If the progressed ascendant is in the first decanate of Aquarius (0 degrees to 9 degrees and 59 minutes), the general interpretation I’ve stated above applies.

If the progressed ascendant is in the second decanate of Aquarius (10 degrees to 19 degrees and 59 minutes), the general interpretation I’ve stated above for Progressed Ascendant in Aquarius applies, as well as the following:

This will cause the native to take a deeper interest in all intellectual pursuits. He will become very refined, and will develop literary tastes, and if he has the natural ability, he will now write or engage in correspondence—in fact, exercise the mind in many ways, to his great advantage.

He will find friends amongst kindred or relatives who will help him, and attachments now formed are likely to be of a very refined and advanced type. He will, moreover, take some journeys while under this influence, probably in the interests of some society or brotherhood.

He will find his mind now becoming much more active, and will live in the mental side of his nature much more than the physical, so that the good aspects to Mercury under these directions will be accentuated. To those who are very advanced, this progressed ascendant will bring a desire to express their principles in detail, and to systematise plans for the benefit of the many.

If the progressed ascendant is in the third decanate of Aquarius (20 degrees to 29 degrees and 59 minutes), the general interpretation I’ve stated above for Progressed Ascendant in Aquarius applies, as well as the following:

This will cause the native to form some attachment, to have the life of another linked with his own for some years to come. He will find a more balanced and equalised state of mind coming to him under this new influence, will become very refined mentally, and will have social experiences that will be more to his liking than formerly.

To the very advanced this brings the opportunity to open up the higher sense of clairvoyance, or clear vision, and brings that state of ‘balance’ which is aimed at by all who desire to make true progress.

It will develop a very keen sense of justice, so that the native will act conscientiously and honourably in all dealings with others. It will give him also the faculty of comparison, and the power to see both sides of a question equally. This progressed ascendant will help the native to take full advantage of all the good aspects operating during the period in which it is in force.